This is my paid version of the Vanilla Hunter Marksmanship Wrobot Rotation
It is highly advanced, and has an in-game interface, where you can control almost every aspect of the rotation.

For support and suggestions please use: https://wrobot.eu/forums/forum/84-hunter-fightclass-vanilla/

Features
The Paid version comes with some unique features like the in-game interface, /commands and more.
The hunter will move back if you are too close to the target to use your bow. This requires that the target does not have aggro on the hunter.
The hunter will feed it's pet if needed, and you can set the food in-game.

Can be used for leveling (Utillizes level abilities)
You can even turn stuff on that is not yet learned.
The fightclass will begin using the abilities when they are learned if they are turned on.

Advanced Settings
Fightclass Settings
- Feign Death Delay (Seconds): The number of seconds after a fight has been started, till the bot is allowed to use Feign Death (The higher the number, the more time the pet has to get aggro).
Pet Settings
- You can add/remove foods from the lists here: It should be noted that if you log out or reloadUI the food lists will reset. (This will be fixed in next update)

Coming Soon
- More advanced settings
- Redesign of switches
- Saving of player added foods between sessions (Right now it does not save the food you add manually if you logout or reloadui.)

1.0.0
- Release
1.0.1
- Aspect of the Cheetah no longer tunrs on between mobs or when running away from mobs.
- Backtracking (Range), made a lot smarter. Does not backtrack if you have aggro, Will not backtrack from mob that is moving. (Still a bug in WRobot, so the range is still 12 instead of 8).
- Pet now goes in defensive mode when attacking a mob (So if the pet is tanking multiple mobs, it will no longer run back to the player when target is dead).
- Fixed Lua Error that compares number with nil (This was caused by the fightclass checking if pet was happy, when there was no pet).
- A lot of small bug fixes that was not hurting, but shouldn't be there.
1.0.2
- Serpent Sting no longer used on Elementals/Undead
- Revisited backtracking AGAIN (Droidz 'fix' did not work)
- Added Aspect of the Monkey (Will only work if Aspect of the Hawk is Disabled)
1.0.3
- Backtracking control added.
1.1.0
- Rewrote backtracking conpletely. It now looks for a spot to stand, where target is in line of sight, and a viable path is available.
This is a small update, more angles will be added later, and even more features is coming soon.
1.2.1 (Very big update) - Go happy leveling update
- You can now do /reloadUI (/script ReloadUI()), without any issues, the UI will load back up (this is how it also works on TBC). ?
- You can now change Combat Range in-game in the UI. (Default is 25)
- Blood Fury will now only be used in melee range.
- Cooldown 2+ mode has been added to all abilities that has modes (Rapid Fire, Bloodfury, Berserking, Beastial Wrath etc.) When in 2+ mode, it will use abiltiies on cooldown, but only if 2 or more mobs are pulled.
- Will now only cast Arcane Shot if mana is 40% +
- Added Disengage
- Added Concussive Shot
- Added Viper Sting & Wing Clip (They are both pvp oriented, and therefor off by default).
- Pet no longer attacks target when feeding, unless it's already green in happiness.
- You can now turn abilities on even though you haven't learned them yet. (This is useful if you are leveling a character). Abilities that has not yet been learned, will give a warning that you haven't learned the ability yet, and it will color the "On" or "Cooldown" in blue instead of green the first time you turn them on.
If you reload the game or UI, it will turn green, so that it doesn't irritae the eye.
1.2.2
- Fix for CombatRange if not changed
- Added option to change Feign Death wait time.
To change it write /run FDDelay = x where you replace x with seconds you want the delay to be. It's currently 4 (was 2 before update)
MUST BE WHOLE NUMBER!
1.3.0 (Big update) - New times update!
- Redesigned the in-game interface
- Redid the backtracking (it now checks every 15 degrees in a 360 degree circle around target for a spot to stand on).
- Rewrote the call pet/revive pet so it now works on Kronos 3
1.4.0 (Big update)
- Redesigned the Advanced Settings interface
- Added a pet food database for feeding pet
- Changed cooldown checking, so it no longer gives a wrobot error (false positive)
- Fixed the range bug that some users were experiencing on first use.
- Added Information Page to the Advanced Settings, where general info about the fightclass, as well as easy copy/paste-able links are for the different forums. (Support, FAQ etc.)
- Removed Pet Food editbox (It's no longer needed)
- Added integration support for my new plugin (In-Game Settings) 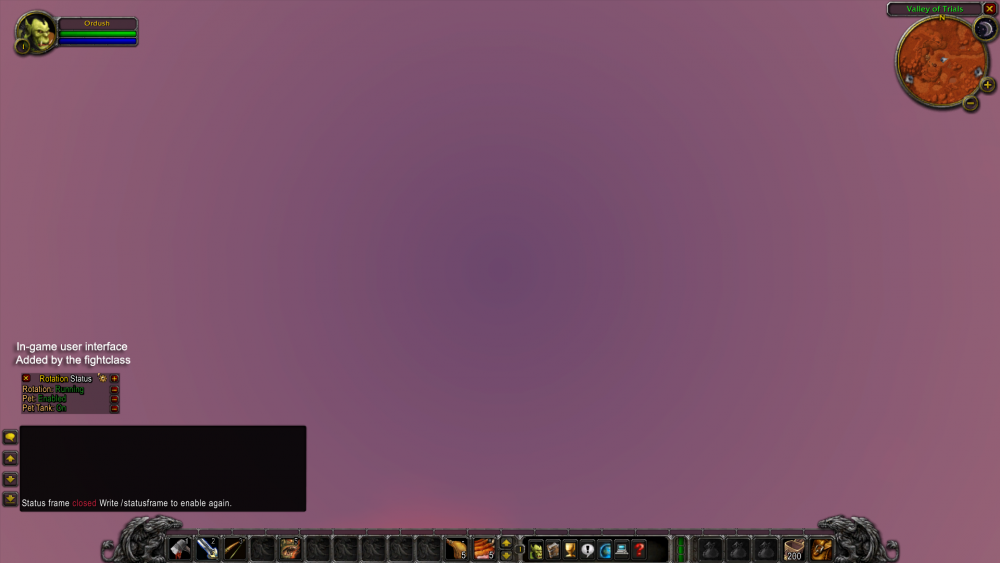 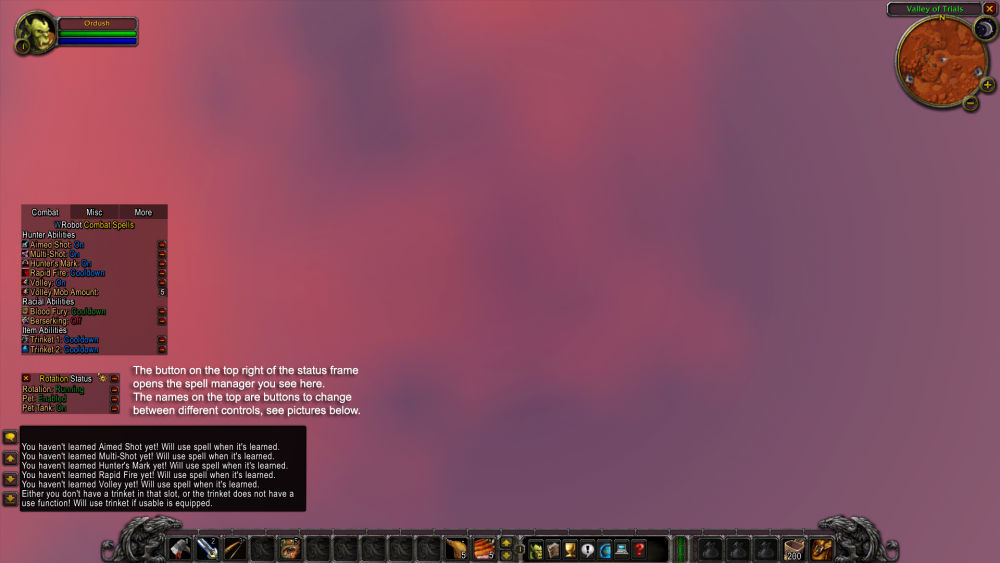 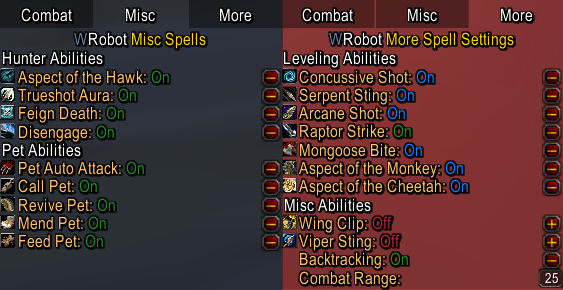 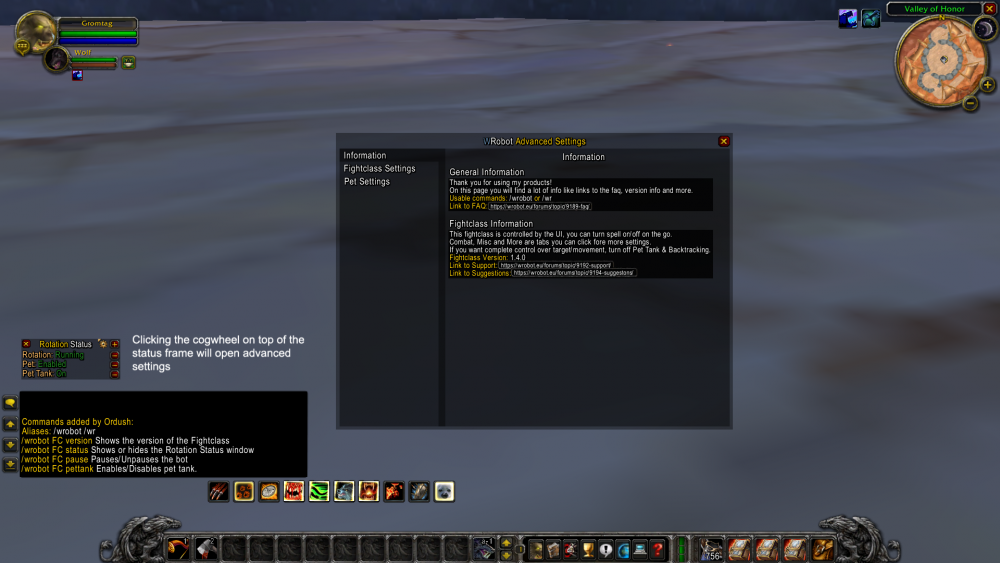 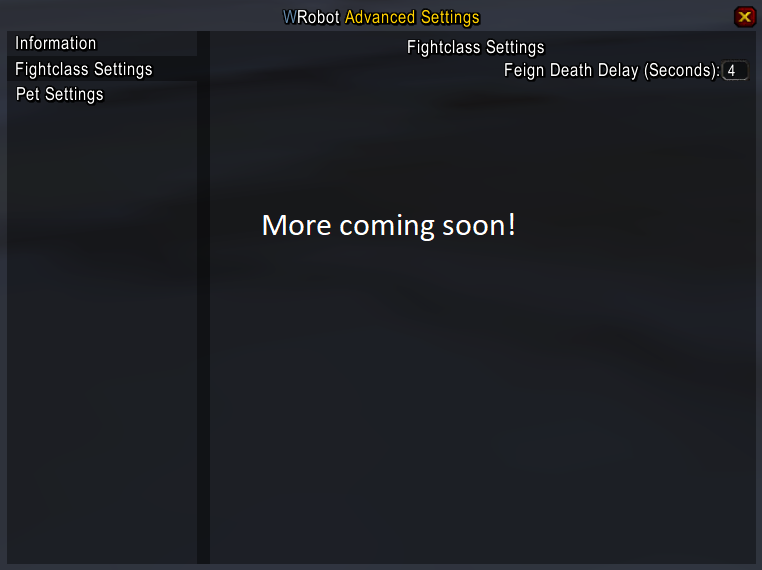 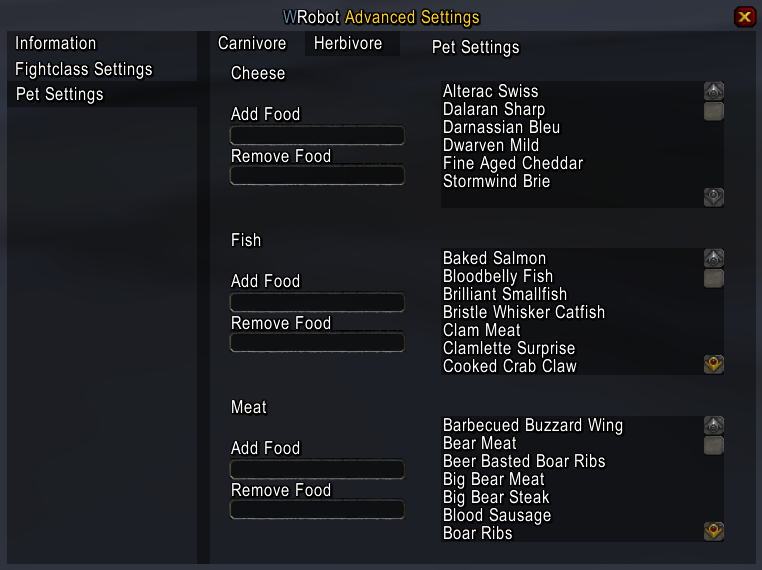 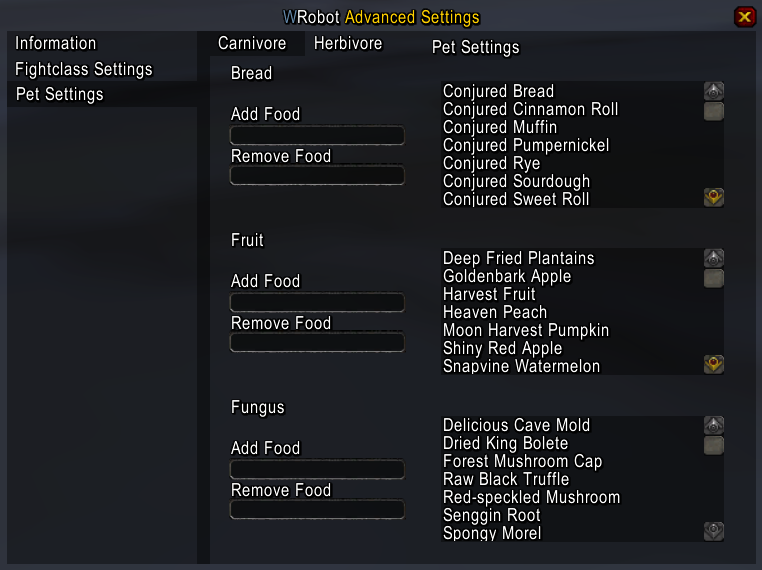 Always feel free to send me suggestions or bug reports via PM on WRobot Forum or through my Discord channel!

1.4.0 (Big update)
- Redesigned the Advanced Settings interface
- Added a pet food database for feeding pet
- Changed cooldown checking, so it no longer gives a wrobot error (false positive)
- Fixed the range bug that some users were experiencing on first use.
- Added Information Page to the Advanced Settings, where general info about the fightclass, as well as easy copy/paste-able links are for the different forums. (Support, FAQ etc.)
- Removed Pet Food editbox (It's no longer needed)
- Added integration support for my new plugin (In-Game Settings)

There are no reviews to display.