I AM CURRENTLY COMPLETELY REWRITING THIS! AND ALL MY OTHER TBC STUFF WITHIN THE NEXT DAYS THESE WILL BE REWRITTEN!!!

This is my paid version of the TBC Hunter Beastmaster Wrobot Rotation
It is highly advanced, and has an in-game interface, where you can control almost every aspect of the rotation.

For support and suggestions please use: https://wrobot.eu/forums/forum/85-hunter-fightclass-tbc/

Features
The Paid version comes with some unique features like the in-game interface, /commands and more.
The hunter will move back if you are too close to the target to use your bow. This requires that the target does not have aggro on the hunter.
The hunter will feed it's pet if needed, and you can set the food in-game.

Can be used for leveling (Utillizes level abilities)

1.0.0
- Release
1.0.1
- Fixed Stuttering when moving if you have a target.
- Sopping rotation now also stops auto shoot.
1.1.0 - Big update:
- Fixed the moving away from mobs if you don't have aggro (it no longer keeps walking backwards).
- Made the profile leveling friendly, it's now very good for leveling as well (Utillizes level abilities)
- Added Racial Abiltiies, Item Abilities, and Leveling Abilities
- Clean up in code. It is now more responsive and clean (DPS is increased!)
1.1.1
- Fixed Serpent Sting keep spamming, even when target allrdy has the debuff.
1.2.0 - Big Update
- You can now choose mode for cooldown based skills like Rapid Fire, Bestial Wrath etc. Modes available: Cooldown: Keeps it on ccoldown (uses it all the time), Elite: Only uses it on elites (Good for questing), Boss: Only uses it on bosses.
- Made a lot of the code smarter. (No more setting an ability to On then reverting back to off, if that ability is not available, now you just can't change it to On.
1.2.1
- Fixed Bestial Wrath not working on Cooldown.
1.2.2
- Added aspect of the cheetah (reupdate after WRobot has fixed lua-leak)
1.2.3
- Added Volley to the rotation.
- Removed some trash code that was no longer being used.
1.2.4
- Cleaned up code for faster reaction, and optimized the FPS.
- Fixed Cooldowns not being used asap.
- Aimed Shot now has mode switch, Pull (Only used once per target (Pulling)), Cooldown (Uses Aimed Shot on cooldown) and Disabled
- No longer breaks Polymorph
- No longer breaks drinking (unless mana is full)
- Aspect of the Hawk/Viper is now used out of combat as before (only if not using Cheetah)
1.2.5
- Added /wrautomove to disable/enable auto moving from mobs.
1.2.6
- Fixed the auto move away from mobs, it will no longer keep backtracking, and it will no longer stutter if you are using a questing profile or have character movement management enabled.
- Removed /wrautomove since it is no longer bugged
1.3.0 - Big Update:
- The fightclass will now save your settings between sessions. So if you have turned off some abiltiies and turn off your game. Then later when you load the game and the FC the settings will return to what they were. (The first time you load the FC it MAY bug out as it writes the settings file. just do /run ReloadUI()
- Your attack speed is now automaticly calculated, even if you have speed buffs this will change so it fits. (try opening the settings and use Rapid Fire).
2.0.0 - Rewrite of all the code
- All of my code has been rewritten in C#
- Fixed some bugs, that was not fixable in xml here are some of them: The UI does not bug first time you use the fightclass. - You can now ReloadUI even without stopping the bot.
- When you pause the rotation in-game WRobot itself will pause; The bot doesn't try to auto-shoot anymore!
- The bot will not attack CC'ed mobs.
- Volley Mob Amount has been added, where you can change the amount of mobs that needs to be in a cluster for the bot to use volley.
- The bot no longer interupts drinking uless you have full mana.
- More tight rotation, meaning higher dps and faster use of cooldowns.
- Much more has been tightened up.
- Removed Ranged Attack Speed from GUI, since this is now automaticly calculated.
2.0.1
- Fixed UI messing up if people clicked the fightclass settings before loading the fightclass for the first time.
- Changed Aspect of the Viper, it now uses Viper if you have less then 80% mana, and you don't have Hawk on, this is in case you use Aspect of the Cheetah, and don't have enough mana to pop hawk.
- A lot of small fixes that did not affect the gameplay.
2.1.0
- Rewrote Fightclass AGAIN, now there is no more lag, not even in the in-game menu! Everything is Silky smooth now! (Prettier Interface as well)!
- Fixed Bug where bot would walk away from dead targets when trying to loot.
2.1.1
- Fixed UI bug, where Aspect of the Viper would Change Aspect of the Hawk.
2.1.2
- Fixed the fightclass so it now works on Netherwing (same issue as K3 for vanilla)
2.1.3
- Another attempt to fix revive on netherwing, if old version didn't work try this.
- Arcane shot now requires > 60% mana to be cast.
- Serpent sting now requires > 50% mana to be cast.
-- This will be changed in the future, because it's not viable for high level playing.
2.2.0
- Fixed Feign death.
- Added better pet control.
- Added Auto Updater
- Will automatically use new spells
NOTE: IT'S A NEW FILENAME! DELETE THE OLD ONE!
2.2.1
- The pet control I claimed to have added in 2.2.0... Seems I made the method for it, but never called it... doh.. It's added now!
- Made a fix for revive on servers that is not based on cmangos.

[Q]: WRobot crashes every so often with your fightclass fix?
[A]: This is because you have turned logging on. In WRobot click 'Log' then turn off 'Fight'. 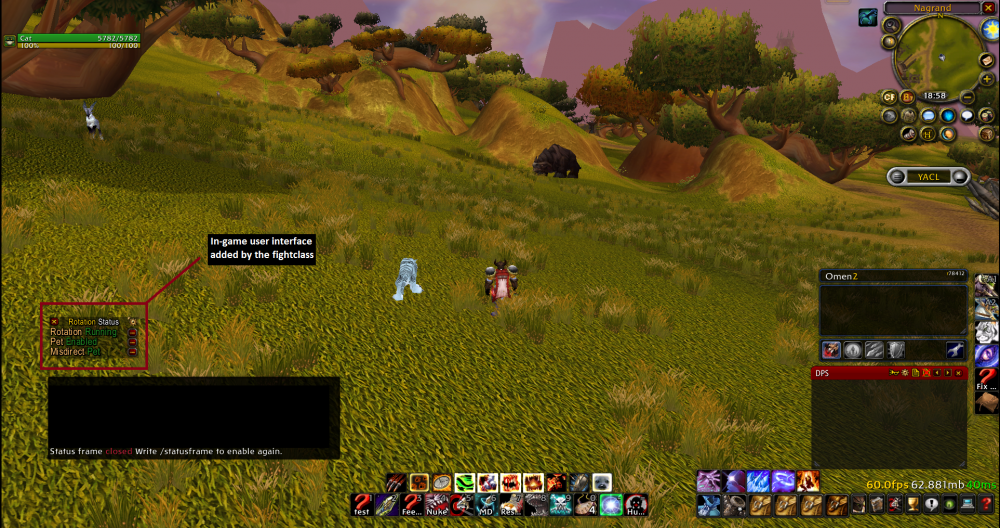 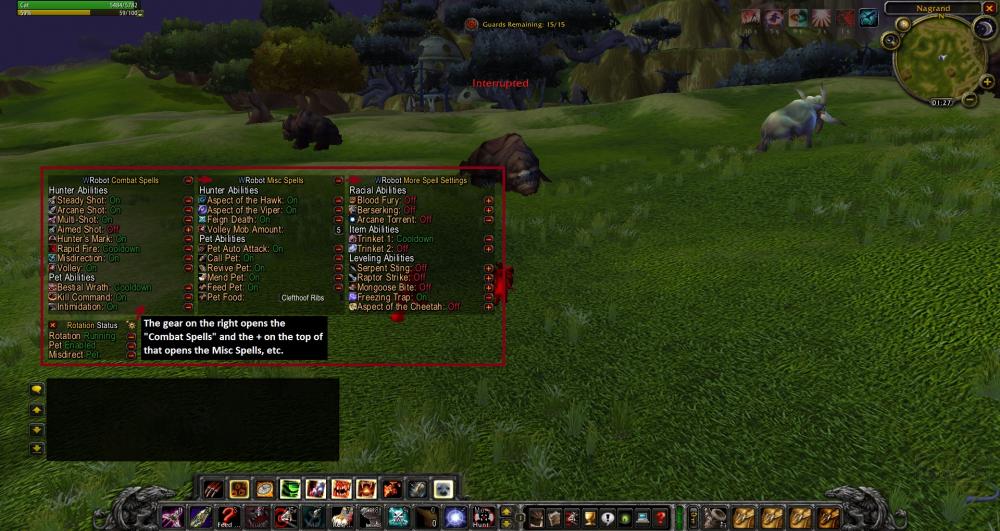 Always feel free to send me suggestions or bug reports via PM on WRobot Forum or through my Discord channel!